With the motto “Robots do it better”, Toa Mata Band is the perfect mixture between music and maker philosophy. By using LEGO pieces and Arduino, the Italian music producer Giuseppe Acito created a real band made up of robots playing instruments.

We’ve already seen impressive creations that use LEGO pieces to make music in the past, from a drum machine sequencer to a Star Wars-themed barrel organ.

Italian music producer Giuseppe Acito decided to take it to the next step and build a fully working band using the little plastic bricks. The Toa Mata Band is made up of several robotic LEGO figures programmed to play a variety of instruments.

Each “member” of the band is constructed from LEGO Bionicle pieces rigged with rubber bands and pulleys. Their arms are controlled by an Arduino UNO, which is hooked up to a MIDI sequencer. The tiny pieces perform a MIDI sequence by hitting the instrument they’re facing when prompted.

So far, Acito has used a range of different synthesizers, drum machines, smartphones, and acoustic percussions. The way the bots are set up, they can perform a pre-programmed song or play live with a human operator adding commands to the MIDI sequence in real-time. 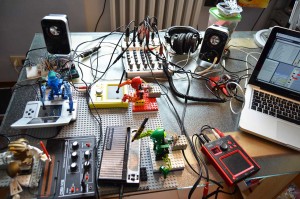 Toa Mata is the name of the first crew of robot warriors, guardians of the island of Mata Nui of the Bionicle LEGO series in 2001.

One day, Italian interaction designer and music producer Giuseppe Acito saw them among the toys of his son and decided to use them as subjects for a band of percussionists.

The project started in 2013 when he decided to use both the robots and his collection of acoustic drums to create a “real band”. That’s when Toa Mata Band started.

About his source of inspiration, he says, “To be honest, the main inspiration comes from the futuristic visions of music that Kraftwerk gave us from the mid-70s. Although it may seem obvious, the tribute that I owe to these artists is very high. As regards to the production of mechatronic music, there is a real current of sonic-robots: from systems that remind us of the ensemble of mechanical instruments of the 19th century (i.e. Pat Metheny “Orchestrion”) to those with an anthropomorphic look like the Z-Machines of the Japanese Kenjiro Matsuo, or German rockers Compressorhead.”[1]