Maker Faire Rome 2015: projects that could really become part of our life

PART 1 | 16-18 October, Rome became an international stage for more than 600 exhibitors. Here are the first eight projects that we have selected, and that could have a real impact on our life.

Maker Faire Rome has seen its 3rd edition and this year’s figures have gone up like crazy: more than 1700 applications received from makers from all over the world; about 600 projects selected for the exhibit; more than 100,000 visitors to animate University ‘La Sapienza’ in a lively central area of the city of Rome.

This week has been passing like this: trying to take the astonished and amazed expression off our faces to start thinking what really will stay in our mind and maybe in our future, after seeing it at last Maker Faire Rome.

We landed in the Italian capital on Thursday afternoon, and everything around us spoke about Maker Faire Rome, from billboards to the back of the city buses. On Saturday a lot of people walked in the streets around University La Sapienza wearing the MFR red badge for press. 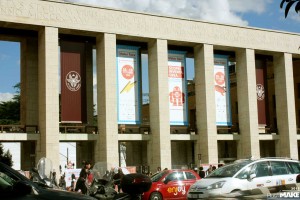 Among the 100,000 visitors, there were not only makers, tinkerers, and nerds, but entire families with children explaining projects and machines to their incredulous parents. In front of Wasp’s 12m Big Delta printer, a guy said to his father, “Daddy, they’re printing houses… Maybe you haven’t realized that yet!”

You could breathe enthusiasm also among exhibitors. Many of them were young startups presenting products that had been introduced as prototypes at the previous Maker Faire Rome. A more concrete and realistic way to exploit digital tools is maturing.

The watchword was ‘empowerment’. Openness toward the community is a concept that is transforming big companies and brands, while feeding startups and innovators. New business models have started taking shape and making the community play a central role within companies.

This is certainly one of the maker movement’s merits. It has spread a new awareness about consumption, which can no longer be ignored on the market.

Exhibitors were distributed from pavilion A to Z according to the subject of their projects, from 3D printing, through design, to healthcare, and so on. The atmosphere was really exciting and every exhibitor deserved attention, although it was really impossible to examine all of the 600 initiatives presented.

The pavilions dedicated to schools and kids were overflowing with people, and you couldn’t distinguish who was teaching whom, children and adults!

Here, we want to give a concise selection of the projects that we think could have an actual impact on our life, and that aroused visitors’ interest the most. Next weeks, we’ll treat and analyze some of these projects more extensively… Stay tuned to discover more about them! 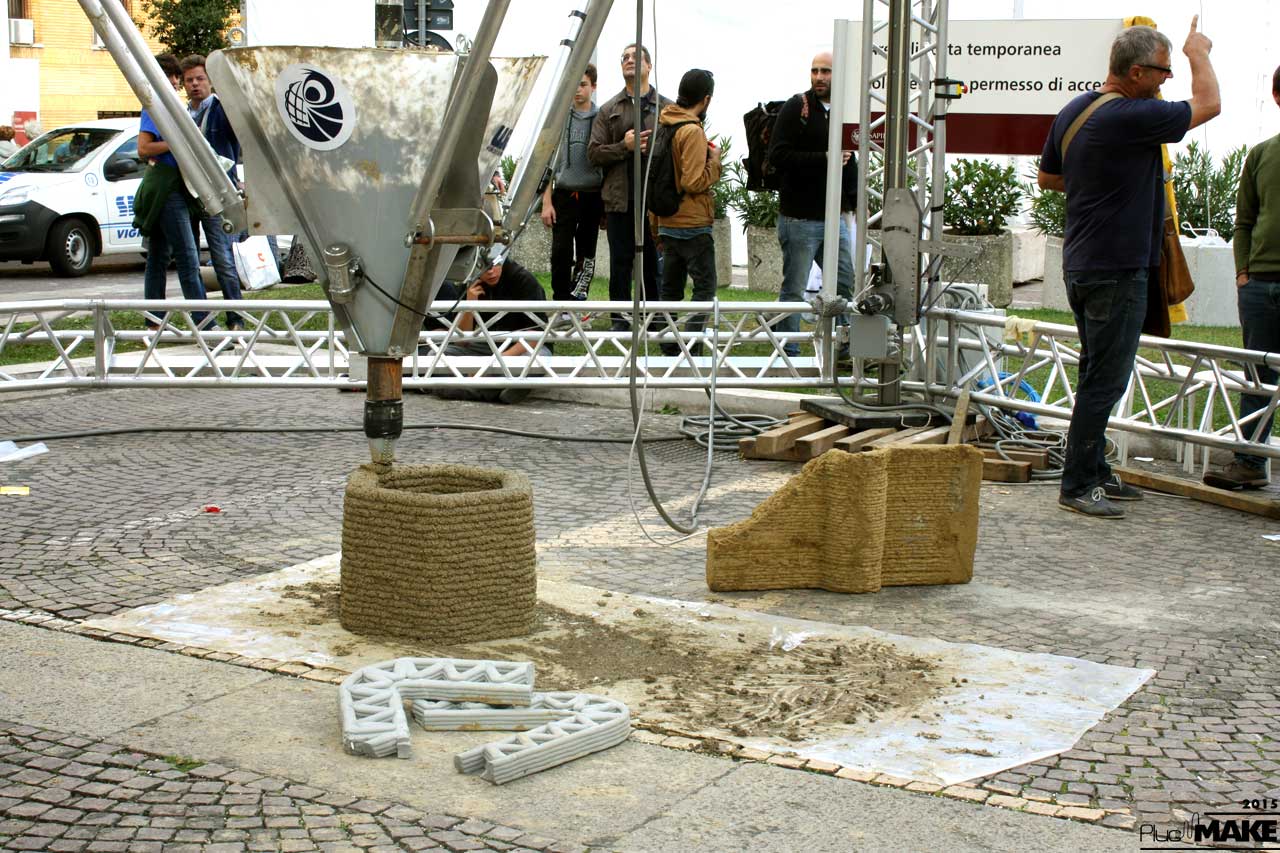 Born in 2012, the name WASP stands for World Advanced Saving Project, and this is how its folks introduce their mission: “We aren’t foolish enough to believe that we can save the world, yet we are foolish enough to work on it.”

Besides desktop machines such as delta and DLP 3D printers, they have developed Big Delta, a 12m tall 3D printer meant to improve the research about the construction of sustainable and affordable houses.

Wasp’s ambitious goal is to allow people living in developing or war regions to build standard-quality houses by using only locally available materials and keeping cost near to zero. 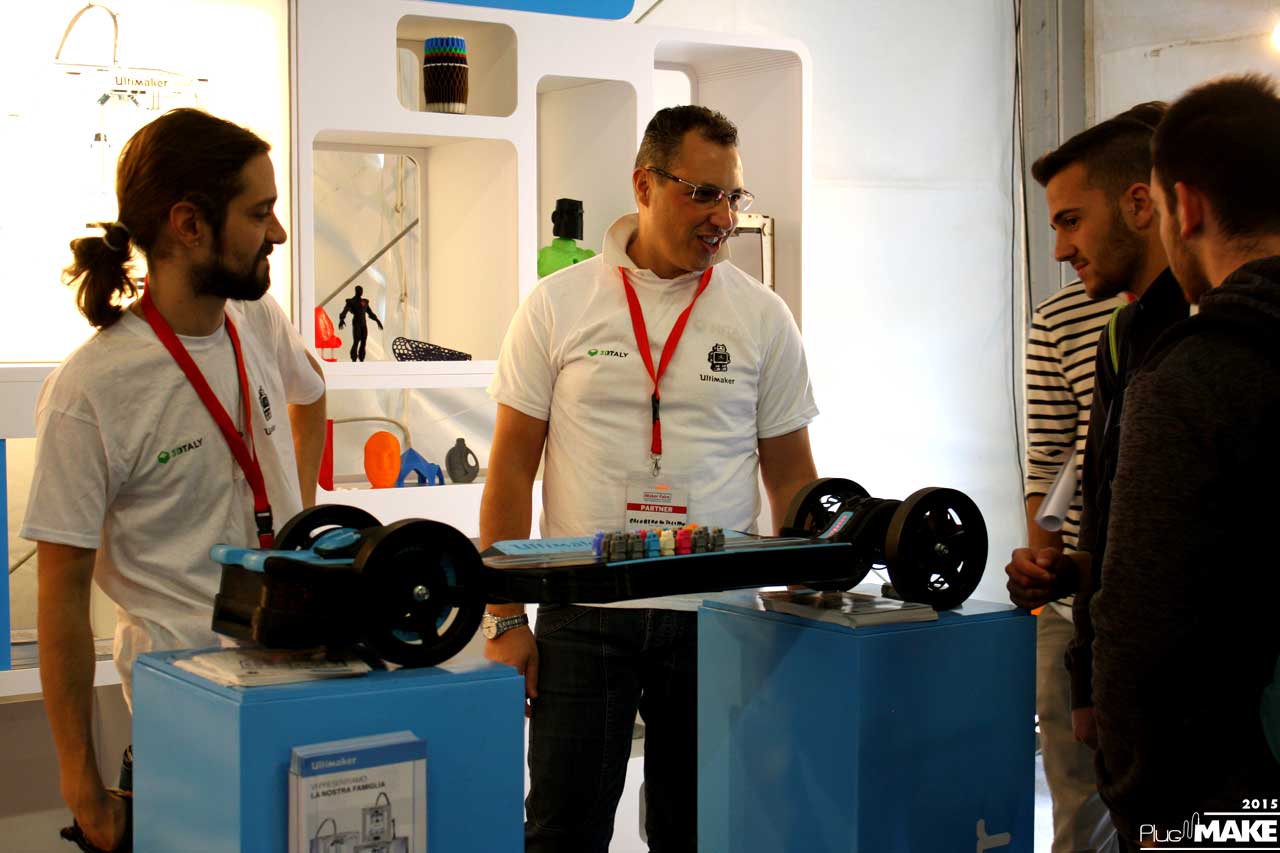 3DiTALY, first 3D printing store in Italy, is official partner of Ultimaker and, among 3D printers and the Faraday Motion’s Hyperboard, theirs was one of the most crowded stands.

The strong social philosophy that permeates their model motivates them to bring the maker culture in the Italian educational system and bring young students closer to digital manufacturing. 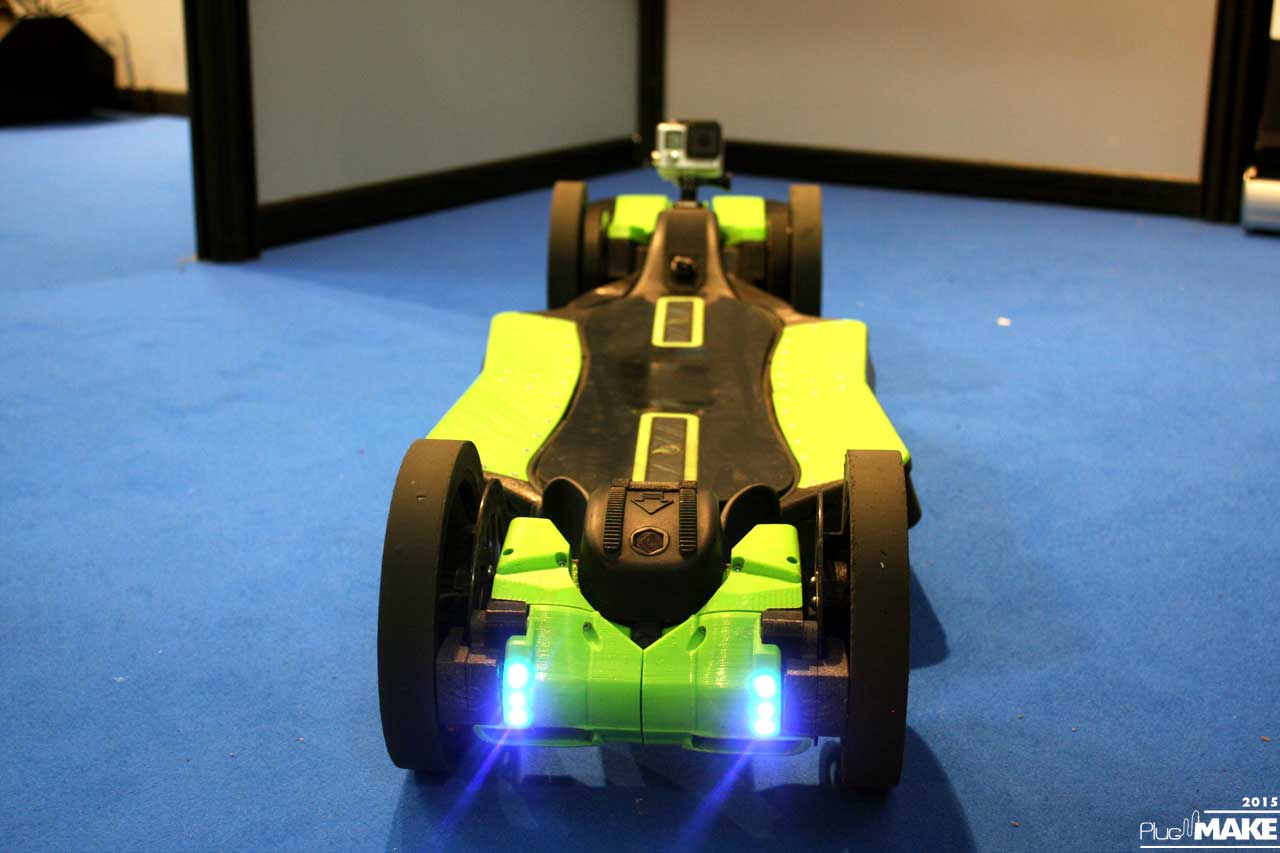 “I have to try it!” are the words we continuously heard from people surrounding Faraday Motion’s stand.

Faraday Motion was founded by Sune Pedersen with the idea of enhancing citizens’ mobility through electric and self-producible vehicles.

Defined the “Ferrari of skateboards” by Italian newspaper Il Messaggero, the Hyperboard is made out of a longboard and 3D printed parts, besides open source electronics components. The project has been released under a Creative Commons – Attribution – NonCommercial – ShareAlike 4.0 International.

Several assembly kits are available now for sale and they are meant to meet anyone’s needs, from the purest makers to the less expert.

The speed is controlled through an app, which exploits smatphones’ accelerometer, while direction is simply determined by how you move and distribute your weight on the board.

Of course, although never been on a skateboard… We couldn’t help trying it! 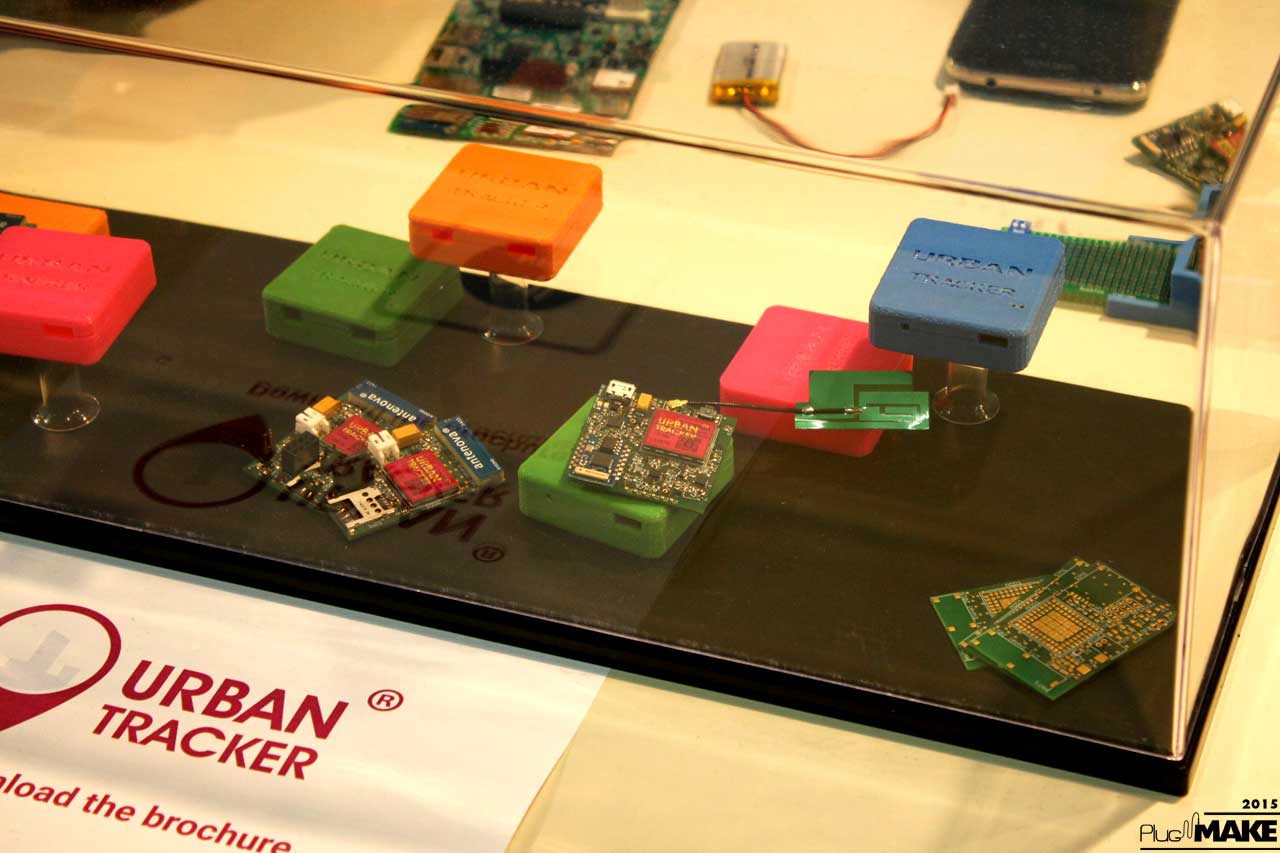 Developed by Stetel, Urban Tracker is a small GPS-free tracker. It could be applied to every kind of objects from the smallest to the biggest ones. It could also be your bicycle or car.

It works both in open and in a closed environment without using GPS technology, but collecting and elaborating information and geo-data via Wi-Fi and GSM networks. 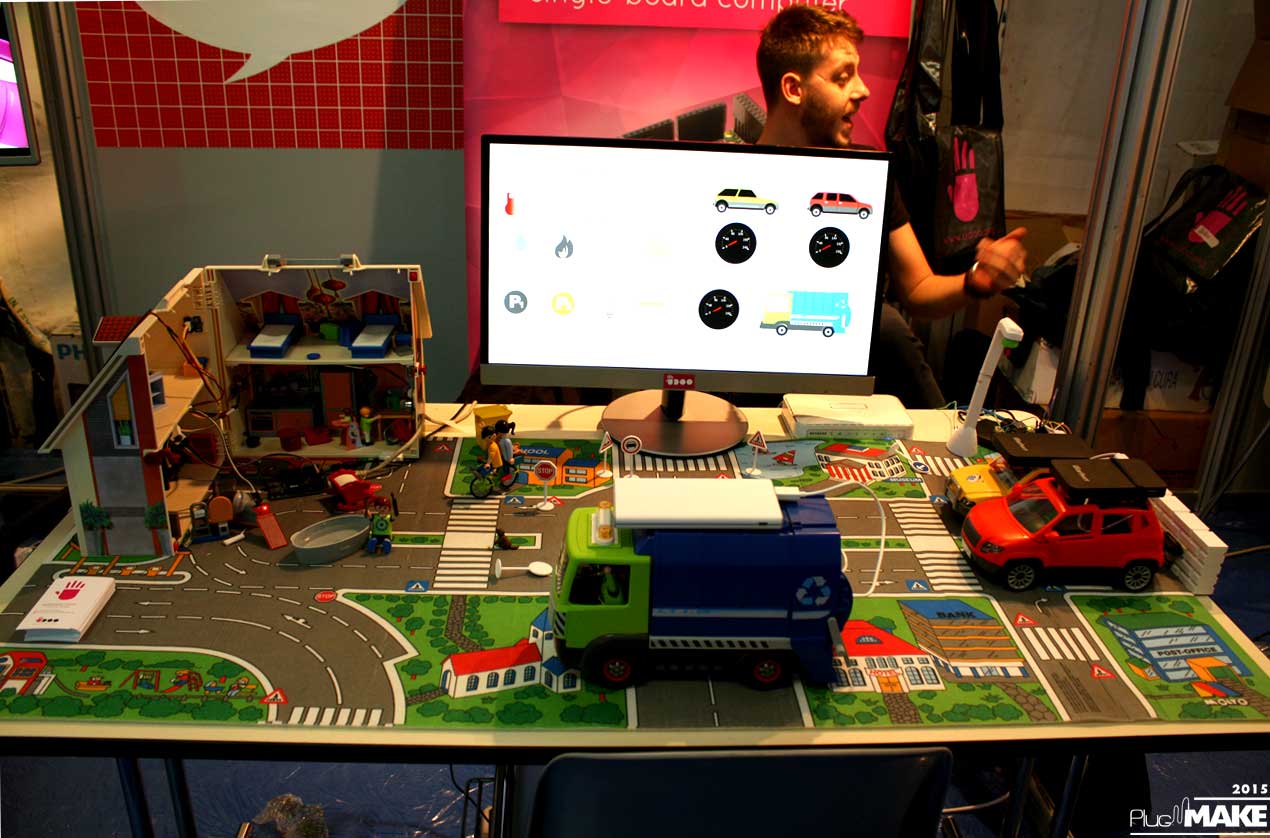 Udoo Neo includes in a single credit card sized board all the opportunities offered by several tools such as Arduino, Raspberry-Pi, motion sensors, and wireless connection.

For the Maker Faire Rome, Udoo’s team set a smart city model to demonstrate the potential of their board in building the most creative and varied projects for the Internet of Things. 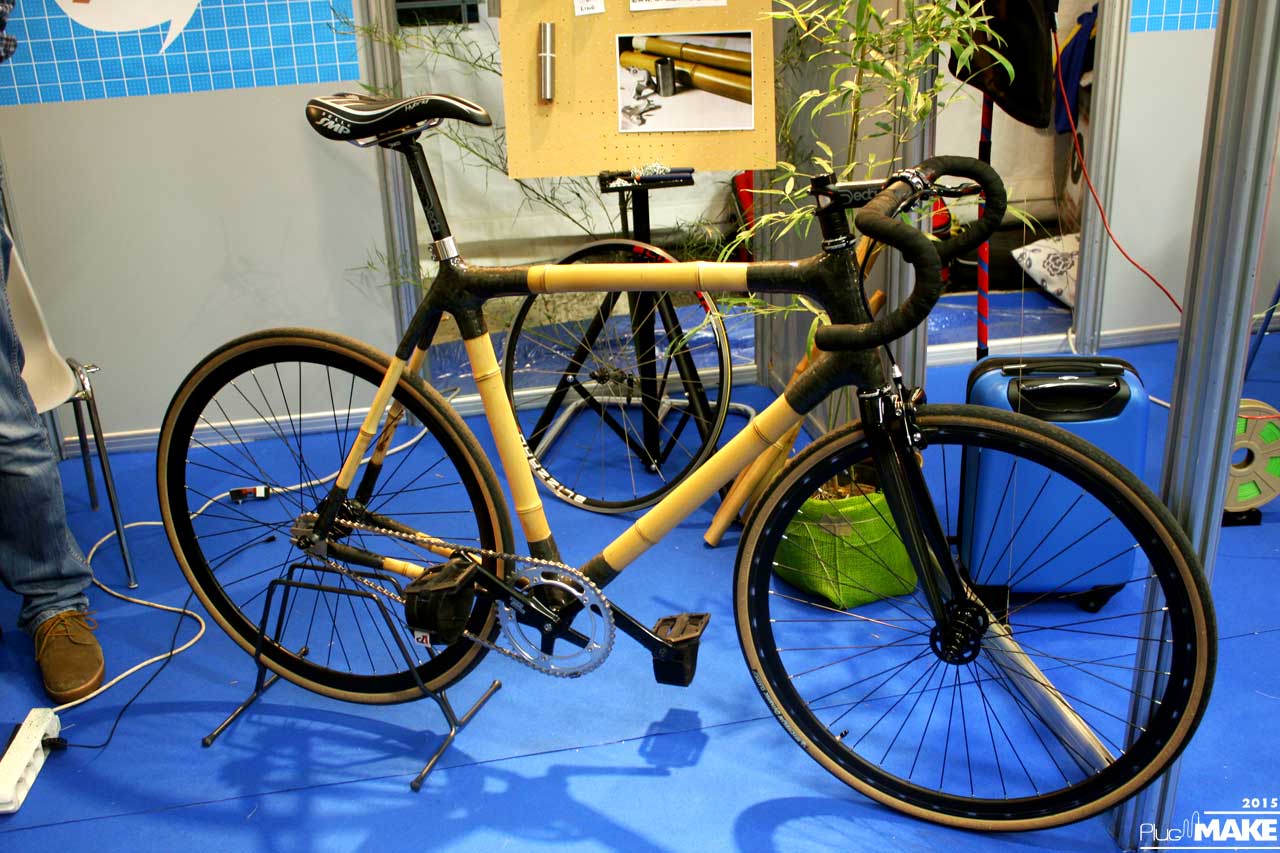 Guglielmo Lisi’s bamboo bike has obtained a lot of success. He has already traveled all over Italy since his focus is to give workshops and teach people to assemble their own bamboo bike.

This is just the kind of innovation that is clearly recognizable by anyone because applied to a daily object. It makes people realize that digital fabrication and DIY are not only a hobby, but they allow all of us to create finished and useable products. 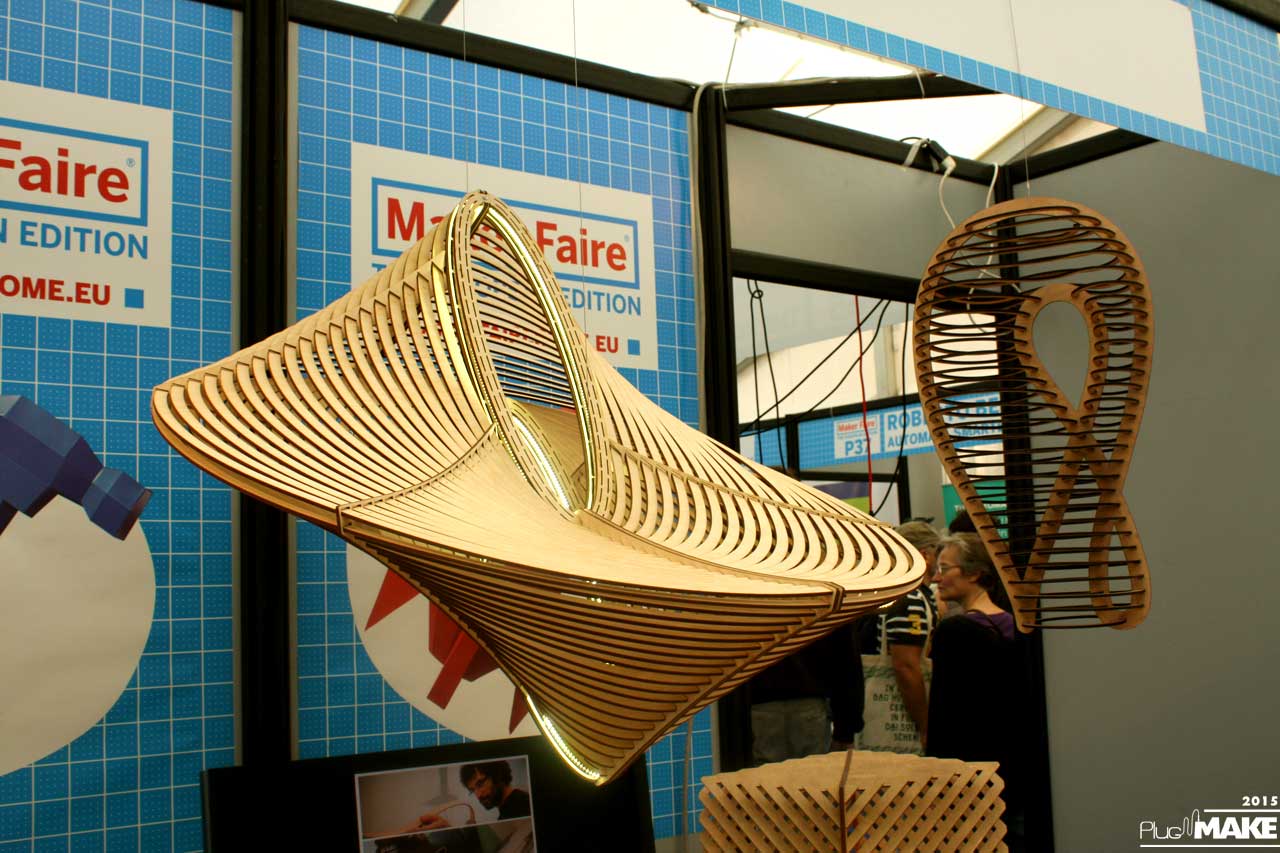 Unsolid is a lamp line born of the creativity of designer Mauro Del Santo. He mainly works with wood, due to its flexibility properties, and laser cutter to create astonishing shapes generated by mathematical algorithms. 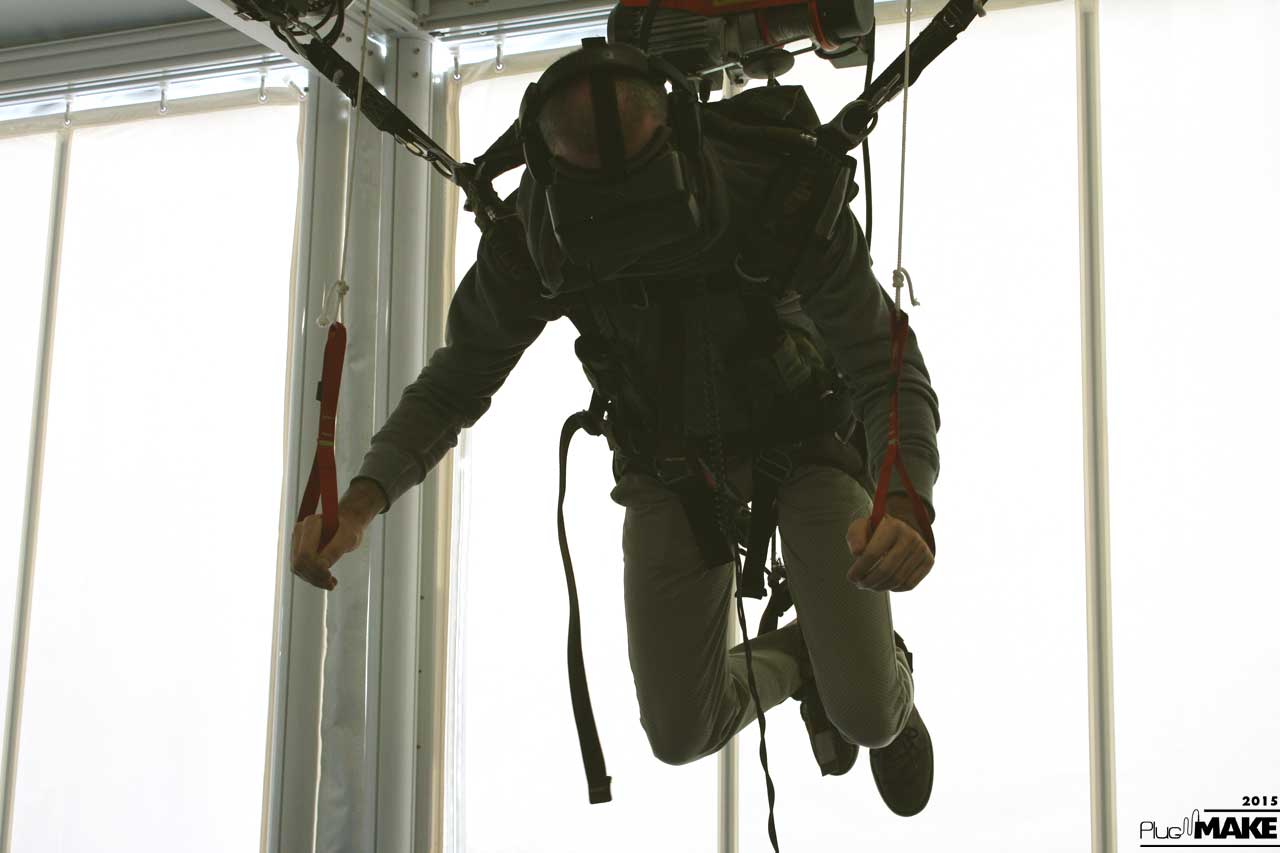 In the whole context, Dutch Revresh’s installation really stood out. Revresh is a startup founded by Eward Hage and Kevin Derksen.

The two guys have developed and showed Para Parachute, an interactive installation who allows people to simulate and, thus, experience parachuting… In a pretty safe way!

The project was born within HKU, University of the Arts Utrecht, in occasion of their graduation thesis and, ever since, Eward and Kevin have kept developing it.