Home » Technology » A global network of the Internet of Things

The Things Network: a global network of the Internet of Things

The Things Network is a Dutch company that, in only 6 weeks, created a free and open network of the Internet of Things covering the entire city of Amsterdam without using 3G, 4G or Wi-Fi. It will soon launch a Kickstarter campaign in order to implement the network worldwide.

The Things Network is a project that wants to bring to the world a public, free and open network of the Internet of Things. It was created in Amsterdam with crowd funding by The Things Network, which received support from citizens and companies and covered the entire city in just 6 weeks.

With a network of sensors and devices spread across the city, people can send and receive data for free.

The mission of such a network, founded by Dutch entrepreneur Wienke Giezeman, is to provide the world with a free network connectivity of things. The network allows objects to convey data to each other and to the Internet.

The Things Network is the first wireless network that uses the new long-range, low power and bandwidth technology called LoRaWAN – created and maintained by LoRa Alliance. The goal is to cover an entire city and connect objects such as boats, trash cans, bikes, and public lighting.

Unlike other Smart Cities projects, The Things Network was entirely funded by the citizens of Amsterdam and was established in only 6 weeks without using 3G, 4G or Wi-Fi.

Nowadays, connectivity is the biggest obstacle to making most of the projects of the Internet of Things viable. For this reason, the creators of The Things Network believe that, with a public and open network, the innovation and creation of new businesses will flourish and will create jobs in the city.

In the Internet of Things era, whoever controls the network will control the world. We believe that this power cannot be restricted to a few individuals, companies or nations. On the contrary, the network must be distributed among many people with no chance to be owned by anybody. 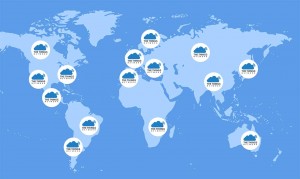 Network projects in the world. Photograph: © The Things Network

Wienke created The Network Things in just 6 weeks when he realized that with a 10 LoRa gateways, which cost 1000 euro, he could cover Amsterdam entirely.

He presented the idea in an Internet of Things Meet up in Amsterdam and received a positive response and support from various participants.

Then, Wienke began to create a community network that developers could use in an open and free way. Companies like The Next Web and KPMG agreed to host gateways in their buildings.

Wienke also obtained the support of the Amsterdam Municipality, which was very excited about the idea. The company Deloitte, besides supporting the initiative, provided technical and legal support.

With this new technology, you can build a network of the Internet of Things without 3G or Wi-Fi. It has a longer range than Wi-Fi (about 10 kilometers) and does not require a monthly subscription plan, like 3G.

Furthermore, the energy consumption is very low, which allows the devices to work with a single battery charge up to 3 years.

The founders of the network want to go beyond Amsterdam and reach the whole world. Various cities are already starting the implementation of the network. The company’s goal is bold: extend the network worldwide in just one year.

In the video below, you can see which city has already started the project.

Despite the cost of the gateways not being high, another crowd funding project will soon start on Kickstarter for the creation of a low-cost gateway easy to install, which can be produced at scale and purchased by anyone who wants to collaborate in the network.

The code, firmware, design and the knowledge for the production of this product will be open source. Anyone can recreate a similar product anywhere in the world.