While waiting for the 3rd edition of Maker Faire Rome, the European Commission is recognizing the potential of the Maker Movement by promoting and supporting its objectives and the rise of a new economic model.

Maker Faire Rome and its role in the European maker movement

Maker Faire Rome is the largest maker exhibition after the one in the Bay Area and the World Maker Faire in New York and it represents Europe in the field of innovative technologies, digital culture, and individual and collective entrepreneurship.

Its objective is to bring hundreds of inventions in one place in order to show visitors what makers are capable of – create, produce, and share new forms of digital manual creativity.

It is an event meant for everybody, not only experts in this field. Even children will get closer to digital fabrication thanks to workshops, contests, and hands-on sessions organized in a fun, informative, and interactive way.

The numbers of the first two editions prefigure a huge success and participation at this year’s Maker Faire in October 16-18.

In 2013, over 30,000 visitors joined the event, hundreds of workshops were held, and plenty of educational programs were organized for children who realized over 3,000 inventions and technological games. 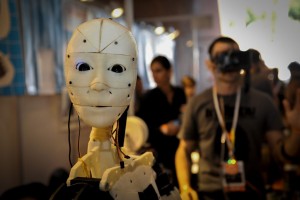 Remarkable names participated, such as Massimo Banzi, co-founder of Arduino and curator of Maker Faire Rome, and Dale Dougherty, founder of Make Magazine and creatore of Maker Faire, who were as surprised as everybody else was by the great participation and collaboration of thousands of people of every age who embraced the Maker Movement for the day.

This year’s Maker Faire in Rome will be held at the Sapienza University. It is organized by the Chamber of Commerce of Rome and sees a line-up of notable partners such as Intel, DWS, Microsoft, Trotec, and many more.

The success of Maker Faire Rome and the other small-scaled Fairs in Europe is accompanied by the development and establishment of FabLabs and Makerspaces in every country – places where people collaborate by sharing their knowledge, expertise, and experience.

They are creating a new economic model, which is based on what Peter Troxler calls lateral connections[1]: the systems based on hierarchical power are being disrupted by the FabLab model based on collaboration among individuals and, therefore, on lateral power.

European Institutions have acknowledged the importance of the movement and see in it a big potential for a new economic model for emerging and established enterprises.

The European Union is playing an important role in the diffusion of digital fabrication as it has been supporting it through a wide range of funding programs and initiatives.

In 2011, Social Innovation Europe (SIE) was established. Funded by DG Growth, this platform has become a community of more than 3,000 people across Europe that works on understanding the context of social innovation in different countries. It is a meeting place, a hub, where innovative thinkers come together to create and develop the practice of social innovation field in Europe.

Thanks to the events that SIE organizes, social innovators, academics and practitioners meet up to discuss the best way to scale social innovation and how the EU can support its development.

In the policy paper of May 2015, Making Good our Future: Exploring the New Boundaries of Open & Social Innovation in Manufacturing, three dimensions have been identified for innovation in European manufacturing:

1) A horizontal dimension, Democratization of making: manufacturing becomes a participatory process in which the domain of big companies is replaced by the participation of regular individuals. The latter, through the use of CNC machines, are no longer mere consumers, but producers as well, de-monopolizing the 20th century industrial complex;

2) A vertical dimension, Supply chain for good: companies are more influenced by their impact on society and are promoting transparency throughout the supply chain;

3) A transversal dimension, Corporate Citizenship: social and environmental concerns are now situated at the center of enterprises’ business strategies and decision-making processes. 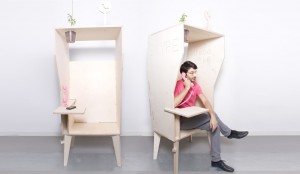 The paper then goes on analyzing how the three dimensions have already entered the business model of successful companies. Among them OpenDesk is also mentioned –  a global platform specialized in workspace furniture.

Everybody can download CAD files made by an international network of designers, and can produce the furniture by building it themselves or by hiring local makers.

The company strategy has the objective of creating a new way for designers to sell at their own prices and, at the same time, it offers consumers a way to buy affordable furniture without the brand mark-up.

Maker Movement as mean for a new economic system

The policy paper recognizes the revolution that the Maker Movement has made in terms of economic models and strategies. Peter Troxler, Research Professor at Rotterdam University of Applied Sciences and board member of the FabLab Benelux Foundation, stated on this regard:

“The established system probably has developed over the past twenty, twenty-five, thirty or forty years. What we call the Second Industrial Revolution has very much been about globalization, about centralization of decision power with big corporates, big companies… Very much a top-down approach.

What we see in FabLabs is a contrary movement which is bottom-up. But corporates are not stupid, they quickly notice that this bottom-up trend has a lot of power.

[…]I think in manufacturing, in the FabLab world, we have at the moment this bottom-up movement and we have to be really, really alert to any attempt to centralize and move that into the hand of top-down corporations.”

Thanks to the work of FabLabs, Makerspaces, and Maker Fairs, the maker movement has officially entered the European economic vision. Through the policy paper, the EU acknowledges the potential and principles of the Maker Movement and declares its commitment to sustain it in order to create and develop a new economic system that can positively affect the established enterprises in terms of social innovation.

[1] Peter Troxler, 2013 – Making the 3rd Industrial Revolution: The Struggle for Polycentric Structures and a New Peer-Production Commons in the Fab Lab Community